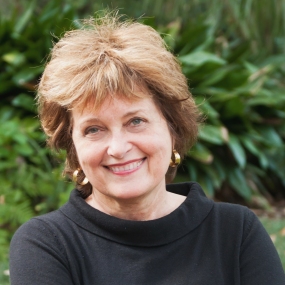 Barbara Hamby is the author of five books of poems, most recently On the Street of Divine Love: New and Selected Poems (2014)  published by the University of Pittsburgh Press.  Gulf Stream staff member Jonathan Duckworth had an opportunity at the 2014 Miami Book Fair International to have a conversation with her. The transcript of their conversation is featured below.

JD: You’re known as a poet who’s mastered and made frequent use of the abecedarian form. It’s considered an intimidating form of poetry for most poets. Why are you drawn to the abecedarian, and were you the original pioneer of the double helix abecedarian form as seen in the title poem of your book, Babel?

BH: Well, I love the abecedarian form, it’s a lot of fun for me, and one of the things I really love about it is that it seems like it exercises my brain a lot more than a free verse poem. It causes me to have more access to other areas of my brain. When I wrote my first one, it was [in] my first book [of poetry], Delirium, and the poem almost wrote itself. So in my second book[ The Alphabet of Desire], I thought of doing a sequence of twenty-six [abecedarians]. And I’ve done that, I think, two times now, and it’s just always an exciting, exciting form. I joke around and say that—you know they say that we usually use about ten percent of our brain, and I felt like when I was doing these abecedarian sequences, I was pushing about twenty-seven percent.

BH: Well, or twenty-eight. Sometimes twenty-six. Probably twenty-six would be good because there are twenty-six letters in the alphabet.

JD: I’ve heard it claimed once that all the best fiction writers were poets before they wrote fiction. I don’t know if that’s true, but your first book of fiction, the linked-story collection Lester Higata’s Twentieth Century, was certainly well-received, and that was written after you’d been established as a poet for years. What was it that pushed you to branch out into fiction?

BH: Actually I wrote fiction first. And my first published story was when I was in the third grade. It was published in the school paper, and as I walked down the hall of my elementary school, sixth graders would say “Hey, I liked your story,” so I knew I was onto something good there. But I just seemed to be able to access my poetic voice earlier than I was able to access my voice in fiction. Actually I wrote two novels—unpublished novels that I still have in my drawer—and lots and lots of stories that I haven’t published. So it was just more difficult for me to access a truly authentic fiction voice, and I was helped in that by Robert Olen Butler.

JD: Right, I think you mentioned in an earlier conversation that you worked about ten years on it.

JD: Actually that seems to be the magic number. I’ve heard so many times: “Oh yeah, I worked on this for ten years.”

BH: Usually it takes me about five years to write a book of poetry.

JD: Wow. What advice can you give to poets who are starting to branch out, or consider a foray into fiction, and on the other side of that, what advice might you offer to fiction writers who are considering branching out into poetry?

BH: Well, I think that it’s the same advice—just read. Read, read, read, read. You have to read, I think, deeply before you can actually think about writing. For poetry, look at anthologies, and I would say the same thing for fiction, look at story anthologies, pick out a writer that really speaks to you, and then you can make a foray into that writer’s larger work.

JD: Why do you think it is that—at least in my experience as an MFA student—we see fiction writers who are terrified of stepping into a poetry workshop, why do you think that is?

BH:  I don’t know. I have somebody in my graduate workshop now at Florida State University who’s—actually she was terrified, but she turned out to be a wonderful poet. So I don’t think there’s really anything to be afraid of, and I think that you’ve had a good experience in the realm of poetry too.

JD: Well thank you. I think once you get past the initial terror as a fiction writer—“oh there’s no plot, and why do the lines end early?”—once you get past that, you realize that—for me at least, poetry is a beautiful, magical dreamworld.

BH: And also too, poetry is made up of sentences the same as fiction, it’s just that poetry is also made up of lines, and they’re not the same thing.

JD: Not at all. Today in the non-fiction genre, there’s such thing as a lyric essay. It’s part poem, part personal essay. Are you familiar with the genre?

JD: It seems to be taking off, at least in academia anyway, and there’s a lot of enthusiasm for it, especially here are Florida International [University], but it seems to me that in fiction, unlike nonfiction, there isn’t this parallel movement. We have things like Nabokov’s Pale Fire and Jean Toomer’s Cane, but they’re looked on as literary curios—things that someone tried once and “oh interesting that is,” but then moved on. Why do you think it is that there’s a lot of enthusiasm for hybrid writing in non-fiction, and almost none—at least none visible—in fiction.

BH: Well, because it’s artistic, isn’t it? I think that the de facto resting place of prose writing is in non-fiction, and it’s really more like it’s conversation, so when you inject non-fiction with poetry you have something more exciting, more elegant, and I think it’s really attractive to young writers and older writers too. I’m working now on an essay about the ode form, and it’s really much more interesting when I inject my travels into it and my thoughts about other things. The more you bring yourself into your piece. It’s like the Gonzo writing—journalism.

BH: The reason why it was so exciting is that they brought themselves into it. So, I think it’s just human. We want to read about other people.

JD: In your newest book, On the Streets [sic] of Divine Love: New and Selected Poems, which was just published early in [2014]. This was the first book you had out since 2010, and looking at your bibliography, I see that—you mentioned earlier that it takes you five years to write a book of poetry.

JD: A good book? So you write some bad books in between?

BH: Not bad books, but the book I’ve been writing on now I’ve been working on for three years, and I could probably publish it with somebody now, but I know if I get two more years I can really polish it up to a high sheen.

BH:  have a rough draft of it now, but in two more years I’ll have a beautiful draft, I hope.

JD: So you err more toward perfectionism than first-out-of-the-post?

BH: Well I have to say that I worked really hard on my first book and there weren’t so many publishing opportunities then, but when it was published I was so glad that other versions hadn’t been published because it won a lot of first poetry prizes, and it was really exciting to have my work acknowledged after slaving over it for so long. I think what happened then is that I just developed a habit of doing it that way.

JD: What you just said about having your work acknowledged, or appreciated, I thought that was interesting. Were you ever discouraged on your path to becoming a poet?

BH: Oh absolutely. All the time. I mean one of the thing that happens often times is that you can’t publish in magazines and—or that a teacher will discourage you. I had several teachers really discourage me. But, you know, it didn’t really work because I just kept at it, I didn’t have anything else I really wanted to do. I was very passionate about it. And you know they were probably right, they couldn’t see anything in my work at the time, but one of the things I find being a teacher is that I never try to discourage anyone because you never know when something is going to blossom in a writer.

JD: I think it’s a very good point. I think a lot of times when writers struggle it’s because they feel discouraged because they don’t feel recognized enough. Although on the other side of the coin—and I think this is the problem that a lot of writers also deal with—is the pure ego aspect, the ones who maybe, shouldn’t be discouraged, but—

JD: They were so cool back in the second grade.

BH: Well when I was in third grade, they were the coolest.

JD: Do you give your imagination a rest after you finish a work, or do you go right back onto the saddle?

BH: Worse than that, I work on multiple projects at the same time. When I wrote my first book of poetry and published it I felt so depressed, because I’d been thinking about it non-stop and working on it, and then I wasn’t working on it and thinking about it, and when it was published it was taken away from me. And so I was really despondent, and I learned a lesson there to start a new work before I finished my old work, even before it was published, so that once something is published then I’m already onto something new. So there’s no chance for depression. It’s kind of post-partum depression really.

JD: Can I put that on a shirt? ‘No chance for depression?’

JD: So, just wrapping up: what can the world expect next from Barbara Hamby?

BH: Let’s see, I am working on a book of poems about journeys—in 2010 I got a Guggenheim Fellowship, and with that money I went on a dream trip of mine. I love Russian literature, and I took the Trans-Siberian Railroad from St-Petersburg to Beijing. And when I was on that trip I wrote a group of poems. The next summer I took another trip from Memphis to New Orleans on the Blues Highway, wrote a group of poems based on that trip, and then in the summer of 2012 I took a trip by FSU—thank you very much—from Troy to Ithaca, following Odysseus’s voyage, and I just in August finished a draft of that group of poems. So I have a rough draft of that new book but I think I need a couple more years to polish it.

JD: You mentioned earlier a second work of fiction, that you hoped wouldn’t take another ten years.

JD: Can you give us any details on that second work of fiction?

BH: It’s a novel set in Hawaii during the 60s. It’s about a missionary family, and I have four hundred pages written—I think I need to have six hundred pages. That’s what I’m aiming for, so I’m hoping by the end of this year I could have a good draft, but we’ll see.

JD: Excellent. We all look forward to that.

JD: Do you have a title yet?

BH: In the Temple of the Fire Goddess.

JD: Mark that down, it’s going to be a best seller.

JD: Thank you so much for the interview, and I’m sure everyone is looking forward to the [Miami Book Fair International] reading.

2 replies on “Interview with Barbara Hamby”